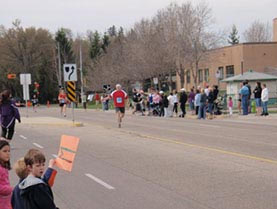 Father of Two Takes on MS

As we rapidly approach the holiday season, I start reflecting on all the wonderful and amazing people with MS that I have been blessed to meet through my charity the www.MSFitnessChallenge.org.

I am truly overwhelmed by the accomplishments of those with this disease and their determination to live their lives to the fullest. When I started on this journey I stood on an island alone, and now I stand in a crowd of achievers. I am honored to introduce you to one tough Canadian with MS, Sean Wingrave.

The following is Sean’s story in his own words:

I am Sean Wingrave a 37-year-old father of two children named Isabella and Jonah (ages 4 months and 2 years, respectively). I’ve been married since 2010 to my wife Andrea who stands by my side as I take MS head on. I live in Edmonton, Alberta, Canada, and I have a website where I express my feelings about MS and encourage others through my information: www.ownmultiplesclerosis.com.

On Remembrance Day of 2006, I was just 30 years old. I was at work at the restaurant I was a partner in when the entire right side of my body started to go numb. My day ended in the emergency room of a local hospital. I wouldn’t work again for seven months and my life would be forever changed.

The emergency doctors couldn’t tell me with certainty but they mentioned multiple sclerosis. Early the next spring the diagnosis was confirmed at the University of Alberta’s Multiple Sclerosis Research Department and I now was faced with a life I never imagined; a life where my future looked very bleak.

After speaking with the doctor, the nurse whisked me into another room where she began reviewing the medication I was prescribed. It wasn’t a cure but rather a vehicle to slow the leaking in a sinking ship. I remember sitting there stunned and numb to the world around me. I was so sunk into my own thoughts and emotions I didn’t even notice that the nurse never mentioned diet, exercise, or lifestyle.

I went to my car bewildered and wondered if there was any point to continuing on. It seemed as though I was beginning the new life of a permanent patient. On the drive home rather being filled with sadness I became really angry. How could my life have become a cruel waiting game of taking the medication and letting the disease take its’ course?

I wasn’t able to accept it. I had to take ownership of it and be the master of my own fate.

Since 2007 I have experimented with many different approaches to my disease and what I have found is far from simple. The approach recommended by my neurologist is a combination of diet and exercise. However, there is more. I have since realized that my own mental state was broken and fractured and that my mind as well as my body would need to be healed.

I actually have mixed feelings about being diagnosed with MS. In some ways the disease has helped give me the focus and clarity I needed to pursue goals. It has also forced me to look critically at myself and admit that my life and lifestyle were far from perfect, and I was headed down a path to nowhere. Don’t get me wrong – I hate the disease and its’ effects, but I have to try and find something positive in my evolving story.

I have to own what happened to me and own my actions moving forward.

David Lyons: When and how were you diagnosed with MS?

DL: What would you tell others with MS to help them reach their fitness goals?

SW: I think the biggest advice I could give a fellow MSer is that if you walk one block today, walk two the next time. Each time you get out make the effort to make a small improvement on the last time.

Don’t be discouraged. It doesn’t matter how far you went, what matters is that you got out and tried. Eventually you will get stronger, and you will get more confident. That is what happened to me. I went from thinking my life was over at 30 years old to running my first half marathon before my 32nd birthday. MS or not, you can do anything you want, but you have to will yourself to do it.

DL: What are your future goals your sport and fitness in general?

SW: I’m a true Canadian male, so of course ice hockey is my favorite sport. I still play a little and participate yearly in one of the larger pond hockey tournaments in Canada.

I’m also an avid cyclist and participate in the Leduc, AB to Canmore, AB (just over 180kms) MS Bike Tour every year in support of the Canadian MS Society. I also ‘free ride’ mountain bike, which is downhill mountain biking done via chair lift or gondola. My favorite spot is the Kicking Horse Mountain Resort in Golden British Columbia.

As far as future goals, I would like my family life to settle out so that I can participate in at least two half marathons per year and eventually start running in full marathons.

DL: Why did you get involved in supporting the MS Fitness Challenge?

SW: I strongly believe, given the unpredictable nature of the disease and how little is known about what causes it, that the only way to truly fight it is by becoming as physically strong as possible.

I don’t believe people with MS should act like patients. They should empower themselves to take control over their own health. I don’t mean this irresponsibly and that the advice of doctors should be ignored (I take medication), but MSers need to understand that their doctors don’t know everything about the disease because, if they did, there would be a cure.

That is why I support the MS Fitness Challenge as I am certain that making your body as strong and healthy as possible is crucial in fighting the effects of MS.

DL: What do your friends and family think about you running marathons with MS?

SW: I think (you’d have to ask them, to be sure) they find it inspirational and, I hope, comforting. The reason I say comforting is that I hope it demonstrates that my diagnosis of MS was not a prediction of my early demise or a quick onset of handicap, but rather more of a life-changing event. This event can either be positive or negative, and it’s up to me to choose the path.

DL: What type of nutritional program do you follow?

SW: I don’t consume any gluten, soy, dairy, or legumes. My nutritional strategies are similar to those made popular by Doctor Terry Wahls and Direct-Ms.org (the pages focused on nutrition). I have been following “paleo-like” nutritional strategies since months after my diagnosis, and my exact diet can be found at www.ownmultiplesclerosis.com.

SW: I’m not currently following my marathon training program, but I will start again in the spring. Right now I lift weights, stretch, and do cardio before work Monday, Wednesday, and Friday mornings for about an hour. For example, on Monday I did the following routine:

What I am doing now is more of a maintenance routine as finding time with the kids is challenging. Once our newborn is a little older and a little more settled I’ll have more time to start the marathon program again. In addition, snow (and below freezing temperatures) has arrived where I live, so finding nice days (or even reasonable ones) to run which align with the family is tough. I make as much time as I can, and my wife has been great in helping me.

DL: What is your next race and when?

SW: I hope this summer. My wife and I (who I met shortly after I ran my first half marathon), and I have two very small children, and it has substantially cut into my regular training time. However, early this past summer I was regularly running distances of 12-17 kilometers, so I think a half marathon next summer is definitely a possibility.

DL: How difficult is it to train for a marathon with MS?

SW: Training for anything is difficult, so it is hard to say. The one issue I had was with my energy levels as sometimes I just didn’t feel like training. It became a mind game where I really had to push myself to train, even when I didn’t feel like it.

DL: Why did you decide to enter a marathon?

SW: I had to stop working for about seven months. Boredom set in, and I started walking. At the time, I was fairly out of shape. The walks progressed to short runs of about a kilometer. I noticed when my blood started pumping the symptoms (numbness) seemed to become milder. The short distances started rolling into longer ones and then I thought I should try a half marathon. I started training and made it happen. I’ve run in three since 2009.